Top Posts
Cyber Security Concerns For Bitcoin as the Price...
What does a quantum computer do? | Latest...
Why I feel so alone | Does technology...
Making of The Artificial Eye best to know...
15 Important Travel Techs For Travelers | 2018
Increase CPC for your Website | make money...
Apple Watch launches a new ECG Feature to...
Apple wins $539 million in seven year old...
Crises of the Semi-conductor industry and its Root...
PCBgogo is Ready To Launch its new Website...
Electronic Engineering

What is Capacitor & How are Electrolytic Capacitors Formed?

To understand how electrolytic capacitors are formed, advantages and their uses in applications, let’s take a review of what capacitor is ? and at what parameter capacitance of a capacitor depends.

The capacitor is a passive component. At this point you are thinking what the term passive define? “  passive indicate those devices which are not capable to control current by mean of another electrical signal. ” (i.e, resistors, transformer, inductors, diodes and capacitor) 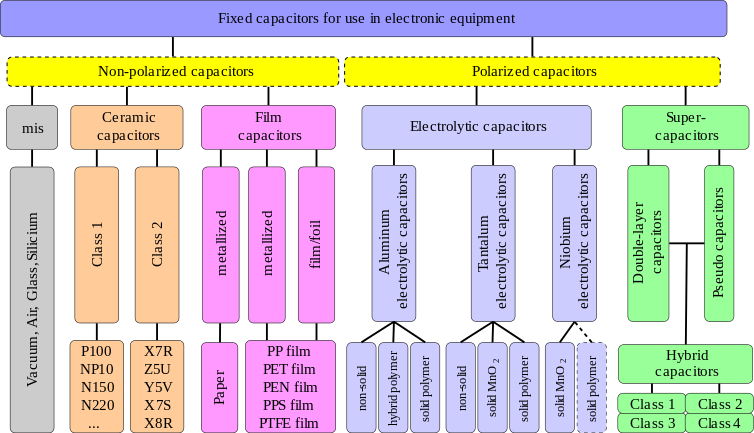 By introducing a dielectric the electric field is decreased, which result in the decrease of voltage and the capacitance will increase. Capacitance depends on three parameters (i.e, the area of the capacitor, a distance between the plates, and permittivity of the dielectric).

Electrolytic capacitors are used in wide variety of applications such as in power supplies, motherboards of TV and computers, more inert circuits, microcontroller boards, audio amplifiers, used for coupling and decoupling purpose etc. Electrolytic capacitors provide a very high value of capacitance because of the use of dielectric between the plates of the capacitor.

HOW BASICALLY ARE AN ELECTROLYTIC CAPACITORS FORMED?

An electrolytic capacitor comprises two plates (i.e, anode and cathode) made up of metal, the dielectric is formed on the anode plate by the process of anode oxidation, this process forms an insulating oxide layer (i.e, a dielectric for capacitor) on the anode plate (anode oxidation  is an electrochemical process which is needed to make the metal durable and corrosion-resistant). Whereas the electrolyte (a liquid which is ionized ) which serves the role of the cathode. The thickness of this oxide layer depends on the maximum operating voltages of the capacitor in order to protect the dielectric from breakdown.

Three types of electrolytic capacitors in term of their metal plates:

In this article, we will be discussing aluminium electrolytic capacitor.

An anode plate of an aluminium electrolytic capacitor is made up of aluminium (i.e, a metal)  which is highly pure (i.e, 99.99% pure). The thickness of this plate is around 20~100um.

There are two basic processes of etching.

The method of etching can be determined by the desired performance of a capacitor.  After etching the chlorine ions on the foil’s surface can destroy the aluminium metal slowly by a chemical reaction as a result capacitor may be damaged. Therefore to protect the foil from damaging the aluminium foil is rinsed into the water. The picture below shows the surface area for low and high voltage foil after etching.

The aluminum foil at the cathode side serves a role to provide electrical contact between the electrolyte and the external terminal. This aluminum is of low purity (i.e, 9.8%). This foil is also etched but it is not subjected to oxidation process as the anode aluminum foil. But it also has very thin oxide layer due to the reaction of aluminum surface with the air which occurs naturally. This natural oxide layer can withstand the voltage of about (1-2 V).

The electrolyte (i.e, a conductive liquid which is ionized) between the anode and the cathode foil basically plays the role of a cathode of the capacitor.

The basic requirement of an electrolyte is mentioned below: 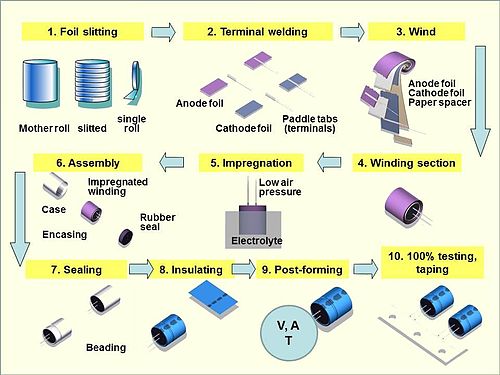 The electrolyte contains polyhydric alcohols such as ethylene glycol (i.e, plays a role of solvent) and ammonium salts (i.e, plays a role of solutes) to restore the damaged oxide layer (dielectric) and improve the performance and life of the capacitor. Then the impregnated element is assembled in which the impregnated element is attached with a rubber seal, and also placed into aluminium case and sealed with a rubber case.

Read Next Article:  How to Test a Capacitor easily by using 6 Methods | Electronics Engineering Technology

Muhammad Ahsan is working as a DIY Projects Content Writer in Electronics lovers. Click on OUR TEAM tab if you really want to read his Profile.

These are the Samsung Galaxy S9’s Eight best features

Diodes: The Different Types and their Applications