Top Posts
How Wireless Charging Works for smartphones | Circuit...
Top 5 News Related to Electronic Industry |...
Once homeless, now on his way to Harvard...
Increase CPC for your Website | make money...
The Future Of Warfare: Military Robots
Why I feel so alone | Does technology...
Autonomous Flights Are the Future of Air Travel...
Making of The Artificial Eye best to know...
Apple Watch launches a new ECG Feature to...
Revolution In Electric Vehicle upto 2018 | Electric...
Electronic Engineering

Do you ever think what basically is inside an op-amp (IC 741)? , how it is configured for performing various functions as mentioned above and what are its characteristics.  I hope that this article will provide you the basic knowledge about the operational amplifier.

As its name implies OPERATIONAL AMPLIFIER, what will you think about the word OPERATIONAL?. If you are thinking about mathematical operations then you are right. It is a device originally designed for performing a mathematical operation (i.e, addition, subtraction, integration and differentiation) and to deal with analog signals. With the addition of suitable external components, the modern day’s op-amps can be used for a variety of application as mentioned above. It can also be used for amplifying AC as well as DC signals, the word AMPLIFIER  refers to increasing the strength of a signal.

It is very high gain amplifier consisting of differential amplifiers, consist of the level translator and an output stage. OP-amp is basically a configuration of transistors with a suitable value of resistors.

In 1968, Fairchild introduced uA741 an internal compensated property. Unlike uA709, it has no latch-up problem, protected against short circuit, and frequency stability. uA741 is also known as second generation op-amp.

Since nowadays many manufacturers are producing 741 op-amps. How can we identify 741 op-amps is manufactured by a particular manufacturer. Many op-amps are identified by using a seven-character ID code. For eg 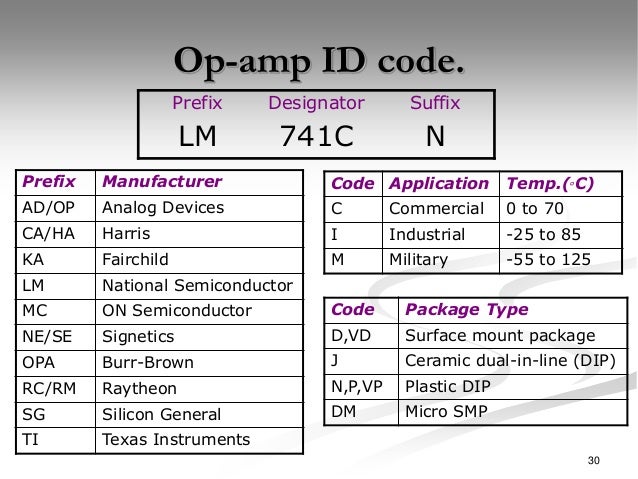 Pin 7 and pin 4 is used as supply pins, at pin 7 positive supply is to be connected and at pin  4 negative supply is to be connected. It has two inputs (i.e, one is inverting input pin 2 and another is non inverting input pin 3). Pin 1 and pin 5 is offset null pins, a potentiometer (typical value of 10k) is connected between these terminals to set the output to be zero. Pin 8 has no connection with the internal circuitry of the op-amp, it is made for full fill the standard 8-pin packaged IC. 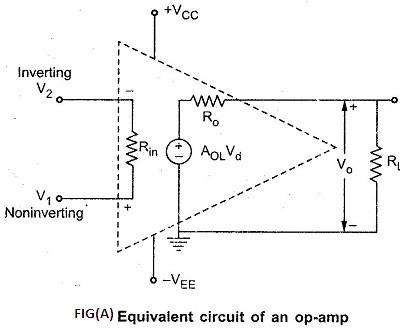 Now let’s understand each of the blocks:

The differential amplifier firstly comprises of a matched NPN emitter follower Q1 & Q2 which provides high input impedance and provide gain, secondly, a matched common base Q3 & Q4 PNP transistors which are used to drive the active load Q7, Q5, and Q6. Q5 and Q6 are the matched pair and perform the function of the differential amplifier for the offset null input signal. The current of Q5 & Q6 is controlled by varying a 10k pot connected between the input pins 1&5. The transistors Q1&Q3 are cascaded in series and Q2&Q4 is also cascaded which provides high gain when the input is applied at its input terminals. The differential amplifier also has the capability of rejecting common signals(i.e, noises which are common at both input terminals).

2) Close-loop configuration: in this configuration, it is connected as negative feedback arrangement. The feedback network is through a resistor(i.e, a passive component)

a) NON-INVERTING AMPLIFIER:  the input is applied at the non-invert input terminal. The gain can be calculated using the value of resistors. Rf is feedback resistor.

b) INVERTING AMPLIFIER: the input is applied at inverting terminal.

c) DIFFERENTIAL AMPLIFIER: in this input is applied at both the inputs, which will amplify the difference b/w the two inputs. 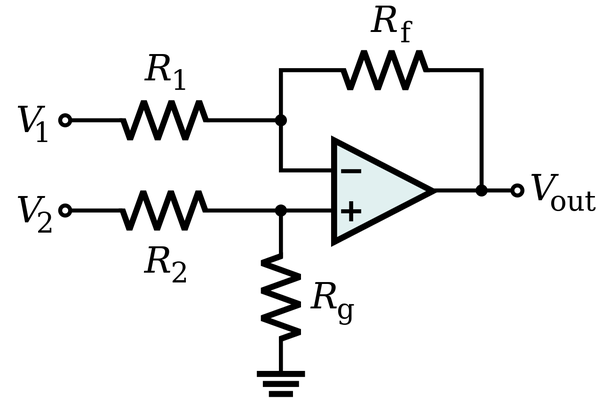 d) VOLTAGE FOLLOWER: It is an arrangement using a non-inverting amplifier, in this instead of giving a feedback through a resistor, we will short the feedback Rf and open R1. The gain of feedback circuit will be reduced to (Av= 1), it is used as a buffer. In this, the output is equal to the input. For eg, used in instrumentation amplifier, to pick a very small signal (i.e, in mV) from a transducer.

uA741 the rating is between 80nA(typical) to 500nA(maximum). The input bias current is the average of two input base current.

The difference between the current into inverting and non inverting input terminals is referred to as input offset current. It tells us how larger one current is from another. 741 has typically 20nA of this current.

This voltage is applied between two input terminal to make an output of an op-amp to be null. 741 has a worst-case input offset voltage of 5mV.

Slew rate identifies that how much maximum frequency at the input is applied in order to prevent the output from distortion. 741 has a slew rate of typical 0.5 volts per microsecond (V/us). It is measured by applying a pulse using function generator at the input while connecting the channels of the oscilloscope at the input and output (set oscilloscope at dual mode). This is a very important parameter.

It requires load at an output greater than 2k Ohm. It has an input impedance of about 2Megaohms, and output impedance in between (50-75) Ohms. Its open loop gain is about 200,000 for lower frequencies.

Muhammad Ahsan is working as a DIY Projects Content Writer in Electronics lovers. Click on OUR TEAM tab if you really want to read his Profile.