Top Posts
E-mail: Tips and Secret Features Revealed For Professionals
Making of The Artificial Eye best to know...
Increase CPC for your Website | make money...
What does a quantum computer do? | Latest...
Cyber Security Concerns For Bitcoin as the Price...
Why I feel so alone | Does technology...
How Wireless Charging Works for smartphones | Circuit...
CTRL-Kit: The First Mind-Controlled Armband and its Demonstration
How do Autonomous Vehicles work? | Automation Levels...
Eight Healthcare Tech Marketing Trends You’ll see in...
Tech News

NASA Next Mission to Put a “Mars-copter” on Mars

NASA released a press release on 12th May giving an update on the Mars 2020 rover mission. Now, the mission objective will include a “landing a helicopter” on Mars.

This autonomous helicopter is being designed by NASA’s Jet Propulsion Laboratory (JPL). The mars 2020 mission is set to launch in July 2020, and now, the mars helicopter will be strapped to the belly pan of the mars 2020 rover and sent with it.  How exactly will this helicopter land on mars?

How the Mars Helicopter is built:

Mars atmosphere has a pressure of around 0.087 psi, compared to earth, it is around 0.6% of Earth’s sea level pressure. And the reduced gravity was another point, Mars gravity is around 38% of the gravity on earth’s surface. The copter therefore had to be built lightweight. It is said to be under four pounds (around 1.8 kilograms). To make it lightweight, JPL engineers used components made of carbon fiber.  The fuselage is the size of a softball. The rover blades are said to turn at 3,000 rpm, compared to the rotor rpm of a typical helicopter on earth which is 460 rpm. 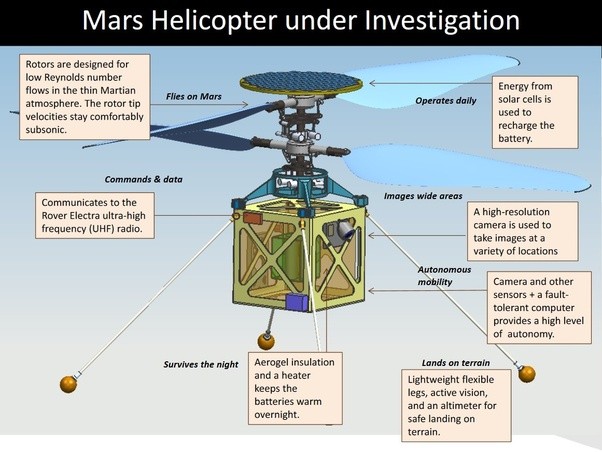 The helicopter will be powered by eight electric motors. The electronics themselves are tested in high-radiation environment so they may function correctly in mars atmosphere. The helicopter will include solar cells to charge its lithium ion batteries, and a heating system built in to regulate the temperature.

How Low will it Fly?

Giving details on the construction of the helicopter, JPL project manager, Mimi Aung, said “the altitude record for a helicopter flying here on Earth is about 40,000 feet. The atmosphere of Mars is only one percent that of Earth, so when our helicopter is on the Martian surface, it’s already at the Earth equivalent of 100,000 feet up. To make it fly at that low atmospheric density, we had to scrutinize everything, make it as light as possible while being as strong and as powerful as it can possibly be.”

Control of the Helicopter:

The helicopter will be autonomous, no human pilot will control it. The distance from mars to earth is itself several light minutes away to its impossible to control this mission from earth. Instead, according to Aung, the helicopter have an autonomous capability that will be able to receive and interpret commands from the ground, and then fly the mission on its own.

Thomas Zurbichen, Associate Administrator for the Science Mission Directorate at NASA says “The ability to see clearly what lies beyond the next hill is crucial for future explorers, we already have great views of Mars from the surface as well as from orbit. With the added dimension of a bird’s-eye view from a ‘mars copter,’ we can only imagine what future missions will achieve.”

What will This Helicopter Achieve?

This helicopter will open new doors for the detailed study of Mars and its atmosphere. The rover will also conduct geological assessments of its landing site, search for natural resources and hazards for human explorers. The rover will also collect samples of rock and soil for future testing if brought back to Earth. 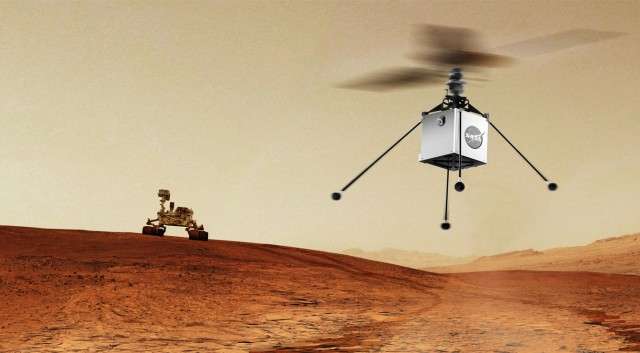 The Mars 2020 rover mission is estimated to cost around $2.1 billion. Using the best of what earth’s resources has to offer, NASA has put a lot of work into this mission. The only question is will it pay off?