Top Posts
15 Important Travel Techs For Travelers | 2018
Increase CPC for your Website | make money...
Making of The Artificial Eye best to know...
U.S. Energy infrastructure On Cyber-Security after Alert Issued...
Once homeless, now on his way to Harvard...
What does a quantum computer do? | Latest...
Apple Watch launches a new ECG Feature to...
What Is Bitcoin and Blockchain Technology? A Quick...
Why I feel so alone | Does technology...
The Usage of Nanotechnology in the medical industry
Electrical Engineering

What is Transformer Protection System?

In common practice, there are so many protection systems being used for the protection of alternator, but power transformers are also an important machine which is to be protected from abnormal conditions. A Merz-price circulating current system is undoubtedly the most satisfactory protective system from alternators. Now we need a system to protect power transformer as well which carries a huge amount of power from one location to another. There is few protective systems use for the protection of transformer i.e Earth fault relays which provides protection against earth faults. Overcurrent relays providing protection against phase to phase faults and overloading. A differential system providing protection against both earth and phase fault. Another special protective device Buchholz relay provides protection against different slow developing faults. This will be explaining in detail later but here I am going to explain the Buchholz relay.

How does Buchholz Relay work?

Basically, Buchholz relay is a gas actuated relay installed in oil immersed transformers for the protection against all kinds of faults. This protective device is named after the inventor Buchholz. This relay is used to give an alarm in case of slow developing faults in a transformer and to disconnect the transformer in case of several internal faults. This protective relay is used in the transformer for protection whose rating is excess over 750Kva. This relay is installed in the pipe between the main tank and conservator at an angle of 9.50. 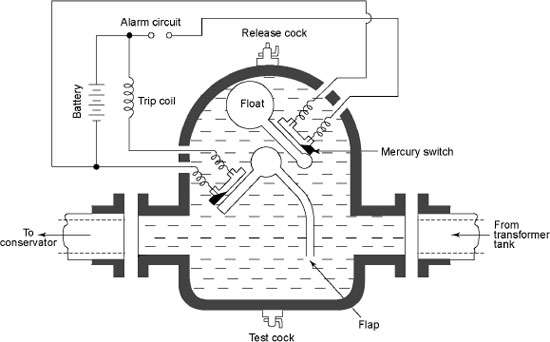 While using power transformer if any slow-developing faults (insulation failure of windings, core heating, fall of oil level due to leakage etc) arise, the oil present in the transformer is decomposed due to heat. This decomposition of oil produces gases in which more than 70% is hydrogen gas. Due to lightweight, the hydrogen gas tries to go into the conservatory which in result activates the floating element. The hydrogen gas exerts some pressure on the mercury type switch, the element tilts to connect to the alarm which produces alarming sound.

Whenever a transformer is using a huge power and if some serious internal faults occur and if very enormous in amount, the oil inside in the transformer produces a huge amount of gas. But due to overheating the oil tends to rushes into the conservator in between the lower element mercury type switch is tilt and which flaps the contacts the trip circuit. This results to disconnect the power transformer from the system and protects the transformer from the severe damage.

What is Test and Tag and What You...

A Guide to Hiring an Electrician in 2022