Top Posts
What does a quantum computer do? | Latest...
15 Important Travel Techs For Travelers | 2018
What Is Bitcoin and Blockchain Technology? A Quick...
Cyber Security Concerns For Bitcoin as the Price...
Is Virtual Reality the Future ?
Why I feel so alone | Does technology...
Talk to books: All you need to know...
The Usage of Nanotechnology in the medical industry
Making of The Artificial Eye best to know...
How Tesla is Disrupting the Entire Automotive Industry...
Electrical Engineering

What is Electrical Circuit Protection Systems?

During the usage of electrical system or devices, it is often desirable and necessary to switch on, off. We need some devices to switch systems either in normal or abnormal situations to protect the entire or partial electrical systems. This function acquires a device which protects the system within no time otherwise the consequences will be on the opposite. It may cause damage to the electrical appliances and can cause huge damage to the humans as well. In the earlier days for this function fuse were frequently used but there are two disadvantages while using the fuse in the recent advance electrical systems. Firstly if the fuse blew out due to any harmful situation it needs to be replaced with another fuse and it takes some time. Secondly, it cannot successfully interrupt the heavy fault in the recent heavy and huge capacity systems.

How Sulphur Hexafluoride (SF6) Circuit Breakers works and what is its role in Electrical Circuit Control & Protection Systems?

In such circuit breaker, sulfur hexafluoride is used for arc quenching which has electronegative gas. This gas has a strong tendency of absorbing free electrons. The SF6 circuit breakers are found be very effective on high power services. Construction wise this circuit breaker is consists of two contacts fixed and a moving contact enclosed in a chamber called arc chamber. The arc chamber is connected to a Sulphur hexafluoride reservoir. The fixed contact is hollow cylindrical contact consists of arc horn carrying current. The moving contact is also a hollow contact with small holes which permits the SF6 to go through it to quench the arc. Further details are provided in the below figure 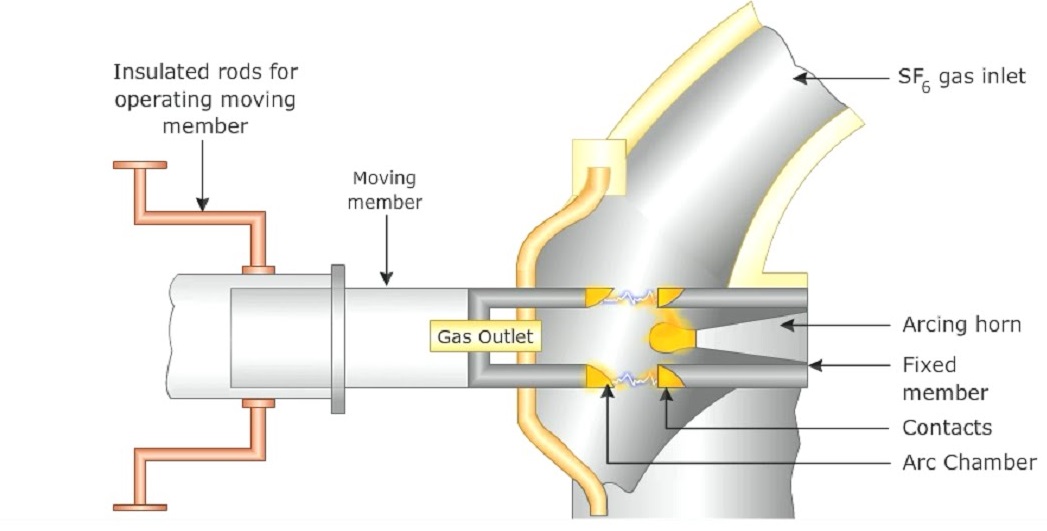 When the circuit breaker contacts are connected in healthy situation or means to be in ON circuit. The contacts are surrounded by the SF6 gas at a pressure of 2.8kg/cm2. But when the circuit breaker contacts are operated the SF6 gas valve opened the gas which synchronized with contacts. The gas rushes into the arc chamber in the occurrence of the arc at a pressure of 14kg/cm2. The SF6 gas rapidly absorbing free electrons from the arc to form immobile negative ions which are ineffective as charge carriers. In the result, the medium b/w the contacts build up a strong dielectric strength which quenches the arc produced due to the contacts operation. The gas valve closed after the arc extinction with a spring control system.

The 5G Revolution: Expected to be commercially available by 2020

Top 10 Reasons Why You Should Study Electrical...

Features and Importance of Switchgear Device Relays in...

Great post Khan.
I enjoyed reading your article about electrical circuit protection systems and I find it insightful and a great read.