Top Posts
Why I feel so alone | Does technology...
Autonomous Flights Are the Future of Air Travel...
Increase CPC for your Website | make money...
Making of The Artificial Eye best to know...
What’s Next | NASA Sending a Tiny Helicopter...
Top 5 News Related to Electronic Industry |...
Smart plugs and The Smart Home Revolution |...
PCBgogo is Ready To Launch its new Website...
What Is Bitcoin and Blockchain Technology? A Quick...
The Future Of Warfare: Military Robots
computing

All devices work by generating heat as a by-product. In order to keep these devices from overheating, thermal management is required. The efficiency of a device is inversely proportional to temperature. Subsequently, high-performance components generate heat that can reduce the lifespan of the device and reduce efficiency. Therefore, we need to keep the temperature in check by removing generated heat from these devices.

Over time our devices have grown smaller, but with increased functionality. This led to faster processing and as a result, more heat generation with increased power consumption. Similarly, the implements are also miniaturized to disperse heat and can become a challenge for engineers. Generally, the heat dissipation must be proportional to the power dissipation, according to the power equation. The three main problems engineers face in managing power dissipation include the dense PCBs, increased density of IC chips and the sizes and mobility of devices.

Some components produce low amounts of heat while other devices produce relatively higher amounts of heat. Therefore, measures are to be taken to prolong their lifespan and reliability. Usually, isolated electric components producing heat will do so until the heat produced within the device becomes equal to the heat lost to the surroundings and the device reaches equilibrium. Heat is usually generated due to resistance to the flow of electrons in the material. Lower the resistance, greater is the conductivity and lower heat is generated. This is proven by Joule’s law H=I2Rt.

Heat management is a major part of the electronic design. To ensure efficiency and accuracy of components and system hot spots, excess heat must be transported away from them. Engineers can use intelligent thermal design to reduce heat-related errors. There are three strict driving forces making demands on materials for thermal management.

First, in order to improve speed, designers compressed the core the microprocessors to smaller sizes. This gives us higher heat generations per unit area. As a result temperature drop caused by conduction within the microprocessor and heat spreader becomes comparable to the maximum allowed temperature drop. Second, there is an increase in temperature rise across interconnect between transistors. This is because of the increase in metal layers and increasing current densities among interconnects. Third, there is an increase in the rise of temperature within contemporary and planned transistor technologies. A decrease in channel dimensions leads to increased power density and electron-phonon non-equilibrium within devices. These pose challenges for research in materials and solid-state physics.

One way of controlling the temperature in circuits or devices is to increase airflow through ventilation. This will result in lower operating temperatures. Also, keep in mind that reduced atmospheric density at higher altitudes results in less effective heat transfer to surroundings and higher operating temperatures. There are several ways of cooling devices such as heat-sinks, thermoelectric coolers, air systems, and fans etc.

Heat loss occurs at the surface of components and increases with the increase in surface area. One way of reducing operating temperature is by increasing surface area. This is accomplished by attaching a metal heat-sink to the device. The heat-sink is usually a good conductor of heat such as copper, aluminum etc. Heat sinks are more effective is the whole unit is well ventilated. Usually, with heat sinks and components come in contact, there is a small air gap between the two over the surface. Air is a poor conductor of heat and so this limits the heat loss from a device. In order to overcome this effect, heat transfer compounds are used.

Heat spreaders are also used as cooling devices. They are thermally conductive metal plates or foils used to distribute heat over a wider area. It is used as an intermediate thermal interface between the heat source and secondary heat exchanger (heatsink etc.) The heat spreader can be applied as a backing plate to PCBs with heat generating components. Thermal vias are used as thermal channels between the heat spreader and component packages to improve heat flow.

Heat pipes are sealed hollow tubes containing a liquid or coolant. One end is attached to the heat source and the other end to a secondary heat exchanger (such as heat sink). Heat generated boils the liquid at one end which travels to the cooler end where the vapors condense and return back to the heated end. They are usually made of conductive metal and is suitable for space-limited board designs. 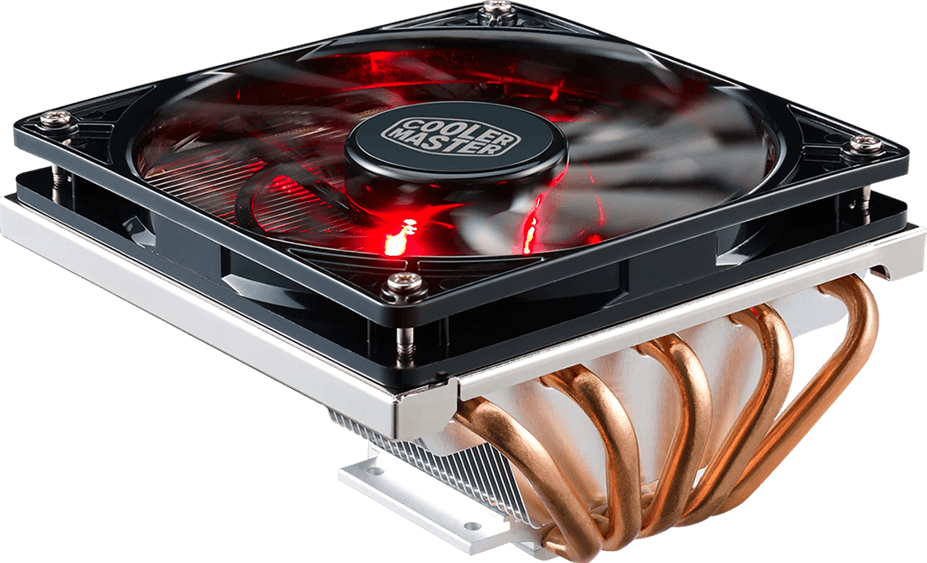 These are thermally conductive, pre-manufactured materials which are available in a variety of forms (pads, adhesives, gels etc.) They are designed to fill air gaps between contact surfaces.  As a result, the maximum surface area is used for heat transfer and the operating temperature is reduced. Heat transfer compounds can be many types. Electrolubes produce thermally conductive pastes which consist of mineral fillers in a carrier fluid (which may be non-silicone or silicone based). Silicon-based pastes have higher operating temperatures than non-silicone pastes. It is important that while using thermally-conductive material the interface between the device and heat-sink is completely filled.

Forces air is another common method used for cooling. This can be done by the use of a fan or blower to increase the flow of air over a heat-generating component. This increases the flow heated air away from the heat-sink and can improve heat dissipation. Fans of various sizes can be used and their placement can be optimized to improve the flow path.

Also knows as TECs (thermoelectric coolers), these are thin and compact semiconductor devices which are placed between the heat source and heat sink to improve heat dissipation. A voltage is applied to the TEC which creates a temperature difference between the two sides of the device and enables heat transfer through conduction.  Although these are not very efficient, they do move large amounts of heat and have a longer lifespan. Also, when current is reversed the heat transfer flow reverses, which turns the device into a heater and can prove to be ideal for applications in temperature control.

Top 10 Latest Topics for Your Electronic Engineering or Tech Seminar

Top 12 Websites Where You can Learn Coding...