Top Posts
Making of The Artificial Eye best to know...
10 New Features in WatchOS 5 for Apple...
How Wireless Charging Works for smartphones | Circuit...
The 5 Steps You Need to Follow to...
What’s Next | NASA Sending a Tiny Helicopter...
Why I feel so alone | Does technology...
Increase CPC for your Website | make money...
How do Autonomous Vehicles work? | Automation Levels...
Once homeless, now on his way to Harvard...
Smart plugs and The Smart Home Revolution |...
Tech News

Apple is contributing a lot to health tech this year. Apple CEO Tim Cook even claims it to be big enough that “you’ll be able to look back at some point in the future, and Apple’s greatest contribution will have been to people’s health.” On Thursday Apple launched the two previously announced heart-related features for the Apple Watch Series 4. You will have to get the watch OS 5.1.2 in order to use these features. 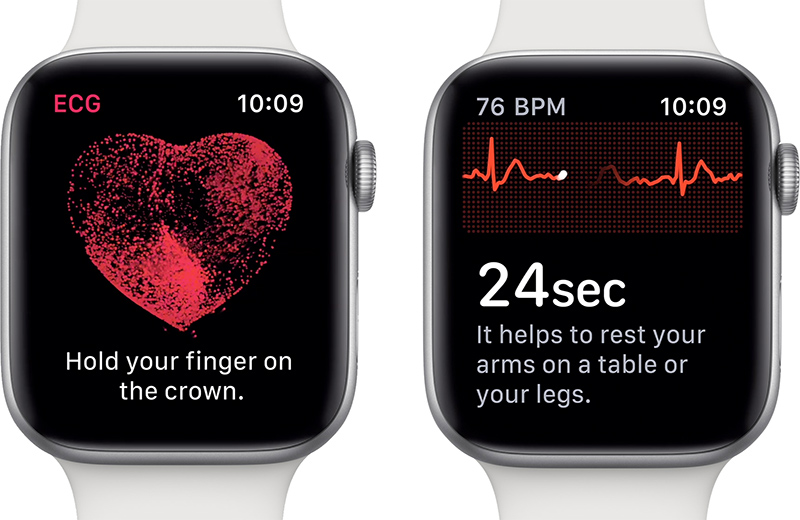 The first feature is a notification feature for irregular heart rhythm that works on all existing Apple Watch models. The second, the ECG feature, that is included in the newest models for $399.

The new ECG (Electrocardiography) app is included in the upgrade. Using the electrodes in the back crystal and Digital Crown a thirty-second test is performed which classifies the user’s heart rate as Afib, sinus rhythm or inconclusive. Afib (atrial fibrillation) is one of the leading causes of stroke and is the second most common cause of death in the world. Using this feature, Apple is hoping to save lives.

In order to use the Apple Watch features you will have to enter your birth date as this feature is only meant for individuals 22 and above. Apple will encrypt your data with a passcode and you can also backup your data on iCloud.

How the Apple Watch takes Measurements:

Electrocardiography is used to record the electrical activity of the heart using electrodes placed over the skin. The ECG app does exactly that. You simply have to open the ECG app on the watch, hold your finger against the digital crown for thirty seconds. The electrodes, in this case, are built into the back crystal and digital crown of the watch. They will measure the electric pulses and show you the results in the Health app in your iPhone. You can also share a PDF of the graph with your doctor. The FDA classified this feature as the first of its kind. The ECG feature was first tested with around 600 patients for clinical validation prior to its release.

What the Results Mean:

Apple not only explains what an Afib is to the user but also tells you what you should do if you receive an alert. However, the company advises people already diagnosed with AFib to not use this feature. This is because the watch takes reading every two hours in order for a more accurate result. In some case, if you do not get an alert that does not necessarily mean you aren’t at risk, so you shouldn’t stop taking your prescribed medication.

The company also states that the watch cannot detect heart attacks. In case of chest pain, tightness or other symptoms you should immediately seek medical attention. Apple also states that the Watch cannot detect all instances of Afibs, so there is a chance you do not get a notification even when you have it. Apple only sends a notification if it detects an Afib five consecutive times.

Apple usually describes the results you may see in three categories. A “sinus rhythm” when your heart is beating in a uniform pattern (this is the normal condition), a “AFib” result shows that the ECG detected an irregular pattern and you should seek medical attention (Keep in mind that you may not experience symptoms even with an Afib result), and “inconclusive” which can happen for a number of reasons. The reasons could be a wet electrode or electrical interference from other devices, or if you have a pacemaker implanted. The app will not classify your result if your heart rate is above 120 or below 50 bpm. 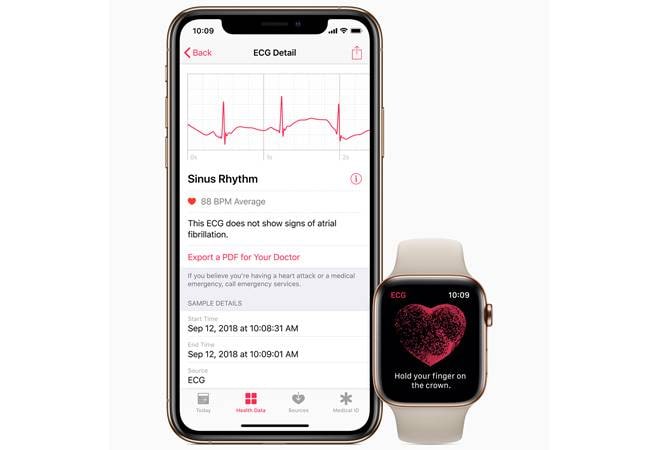 This app is made for people who experience symptoms of AFib, you can easily record these symptoms through the app. There is also an option of “chest pain” which will contact emergency services for you if selected. You can also contact 911 through the watch.

Health Tech was introduced by Apple since 2014, though the iOS health app. The app can perform a number of functions such as tracking your nutrition, housing a medical ID, tracking medications and offering emergency contact services. You can also store your medical records on the app. In conclusion, we can say that people are starting to become more aware of their health through the innovations being made at Apple