Top Posts
Making of The Artificial Eye best to know...
Why I feel so alone | Does technology...
Increase CPC for your Website | make money...
What’s Next | NASA Sending a Tiny Helicopter...
Top 5 News Related to Electronic Industry |...
The Future Of Warfare: Military Robots
Cyber Security Concerns For Bitcoin as the Price...
What does a quantum computer do? | Latest...
Autonomous Flights Are the Future of Air Travel...
Talk to books: All you need to know...
Physics

Microwave & Microwave generation | How do they work?

Role of EM Waves and Antennas in Microwave Communication In microwave communication, the modulated signals are radiated through an antenna in the atmosphere while the receiving antenna receives these information signals. Microwaves depend mostly on the resonant cavities and waveguides through which microwaves are generated and transmitted (The metallic cavity or empty cavity present in the conductive material which is tuned on a specific frequency is called cavity resonators). Microwaves transmission is done through electromagnetic waves which are also called light of sight of communication. A line of sight communication is generally that communication in which the information signals are transmitted in the atmosphere without any physical medium and the receiving antenna receives the signals. Point to be noted that in a line of sight communication both the antennas must be face to face on the transmitting and receiving towers.

Microwaves (0.3—300Ghz) are categorized into three groups according to their bands.

Due to some limitations of the conventional tubes i.e. inductance and capacitance balance b/w the electrodes, the speed of electrons from one electrode to other electrodes etc. Microwaves generation is not possible from them. There is need to use some special tubes through microwaves can be generated in few watts up to hundred watts. For that purpose, there are some special tubes called microwave generators which are frequently using as microwave generators in microwave communication. I.e. Magnetron, klystron, traveling wave tube. Which are used as microwave oscillators and microwave amplifiers as well? Here we are going to explain in detail the microwave tube magnetron.

What is Magnetron and How it Works?

Construction wise magnetron is basically cylindrical in shape. A magnetron is consists of eight permanent copper anode cavities around a heated tungsten cathode. The number of cavities must be even in the magnetron. Cavities size is generally kept according to the oscillation frequency. All the cavities are made at 300 or 450. Co-axial cable is connected to one of the cavity to get the desired output microwaves. While generating high microwaves waveguides are used to get the output signal. 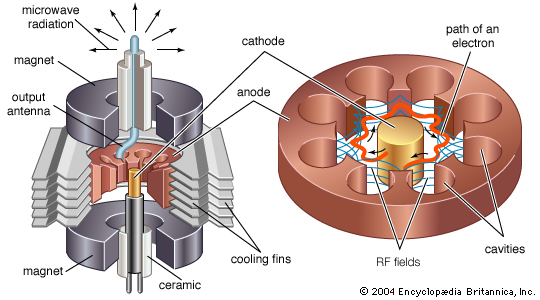 Hence we concluded that if we provide and maintain a certain value of magnetic field around the magnetron tube we can get the desired frequency of microwaves. Magnetron produces microwave frequency from 900 MHz to 2.5 GHz with a power of 3oo watt to 10k watt, while it works about 70% efficiency.

10 Steps to Create That Perfect Resume for Engineering Students