Top Posts
Cyber Security Concerns For Bitcoin as the Price...
What does a quantum computer do? | Latest...
Making of The Artificial Eye best to know...
15 Important Travel Techs For Travelers | 2018
Increase CPC for your Website | make money...
Apple Watch launches a new ECG Feature to...
Crises of the Semi-conductor industry and its Root...
PCBgogo is Ready To Launch its new Website...
What Is Bitcoin and Blockchain Technology? A Quick...
Top Six Key Technologies for Smart Cities 2019
Tech News

For over seven years, Apple Inc. and Samsung Electronics Co. have been involved in a smartphone patent-run. The latest verdict was carried out in Apple’s favor when the court demanded Samsung to pay $539 million to Apple for infringing five patents with Android phones sold in 2010 and 2011.

What started from 2011, when Apple first demanded a verdict in its favor after blaming Samsung of corporate patent infringement. Apple initially demanded $2.5 billion when the patent first began. The case continued on the following year and the amount was reduced to around $1 billion in the 2012 verdict. Samsung, however, paid only $339 million after appealing to the court. Samsung argued however that they should pay only $28 million. By July 2012, both companies were involved in over 50 lawsuits all over the globe.

The latest verdict in Apple’s favor

Since then, a number of appeals have upheld this case. The previous biggest update was in November 2017 when Apple was paid $120 million owing to the “slide-to-unlock” patent. Now, the latest verdict has been laid in favor of Apple, based on infringement of three Apple design patents. Jurors in San Jose, California decided that Samsung infringed three patent designs, the rounded corners of its phones, the rim surrounding the front face and the grid of icons, along with two utility patents. 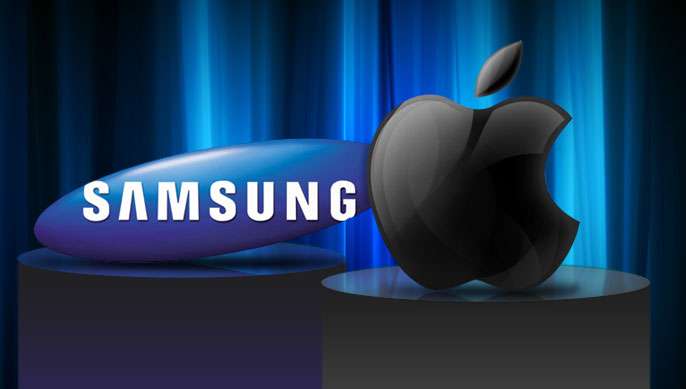 Samsung and Apple’s statements regarding the verdict

“Today’s decision flies in the face of a unanimous Supreme Court ruling in favor of Samsung on the scope of design patent damages,” Samsung said in a statement, “We will consider all options to obtain an outcome that does not hinder creativity and fair competition for all companies and consumers.”

Apple said in a statement that the case “has always been about more than money. We believe deeply in the value of design, and our teams work tirelessly to create innovative products that delight our customers.”

Now Apple states that Samsung should pay damages based on sales of the smartphones which involved infringement, and should, therefore, hand over all profits made. While Samsung says they only pay for the damages on the specific components. The jury awarded Apple US$533.3 million for Samsung’s violation of design patents and US$5.3 million for the violation of utility patents.

But take a look at Samsung’s profits. Samsung earns $38.9 million each day, which means they could pay off Apple in around 2 weeks tops. After Samsung’s statement, it so seems the Apple and Samsung feud will remain for quite some time. They are going to be competing for the highest ranking in the smartphone market for decades to come.