Top Posts
15 Important Travel Techs For Travelers | 2018
Increase CPC for your Website | make money...
Making of The Artificial Eye best to know...
U.S. Energy infrastructure On Cyber-Security after Alert Issued...
Once homeless, now on his way to Harvard...
What does a quantum computer do? | Latest...
Apple Watch launches a new ECG Feature to...
CTRL-Kit: The First Mind-Controlled Armband and its Demonstration
What Is Bitcoin and Blockchain Technology? A Quick...
Why I feel so alone | Does technology...
Physics

Consider a bulb which is connected at the ends of the coil which is rotating in a magnetic field. Each time the flux through the coil changes it will cause a current flow in effect causing the bulb to light up. This no doubt is one method to get electric energy, but what will happen is that in this type of arrangement the coil will break due to continuous twisting. Here the use of “Brush Contacts arises”. (Look at the figure below, this is an example of an elementary or single loop generator).

What are “brush contacts” and why are they used ???

Brush contacts and contacts commonly known as ‘Slip Rings’ are used at the ends of the coil. Slip rings are used to make electrical contact between the stationary and rotating conductors; thus enabling the stationary power source to transmit power to the rotating part. Slip rings are used to collect the alternating EMF from the windings, which is further collected by carbon brushes to an external circuit.

Variable Positions Of The Loop:
The angle variation during rotation between the normal of the coil and the magnetic field lines causes variation in the magnitude of the EMF produced. That EMF also depends upon the rate of change of flux through the coil. The figure below shows the different positions of the coil from 0 deg to 180 deg, and then from 180 to 360 deg. 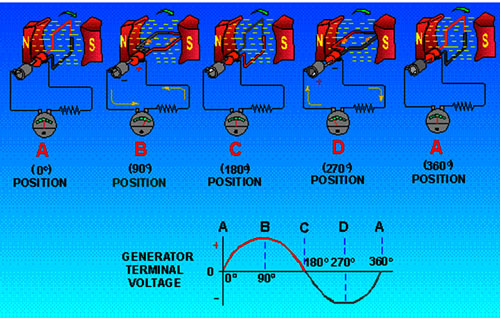 At 0 degrees Position:
This position is also known as the “Neutral Plane”; In this position the loop is parallel to the magnetic lines of flux and there is maximum flux passing through the coil. Yet there is no production of EMF because there is no “Change in flux through the loop”.
At 90 degrees Position:
After the loop has been rotated 90 degrees clockwise through the magnetic field the flux linkage through it now becomes zero. But the rate of change of flux through it was maximum, resulting in an induced EMF which climbs from zero to its peak value.
At 180 degrees Position:
Once again the coil is rotated 90 degrees clockwise resulting in the completion of a 180 degrees cycle. Here the loop is perpendicular to the magnetic lines of force which means that there is maximum flux density through it. The EMF falls back to zero.
At 270 degrees Position:
Up till the 180 degrees cycle, the polarity of the voltage had remained the same, because “the conductor’s armature cutting through the southern magnetic field was the same” but now the polarity will change because “That armature will now be cutting through the northern magnetic field” and vice versa.
At 270 degrees the flux linkage through the loop is once again zero, but the rate of change of flux is maximum. In this position, the EMF induced goes up to its peak value, but this time it’s in the reverse direction.
At 360 degrees Position:
The loop is rotated through another 90 degrees such that it has completed a rotation of 360 degrees. The loop has returned to its initial position and the flux linkage through it is maximum and the voltage decreases back to zero.

This type of voltage produced is Alternating Voltage.

What is Difference Between Arduino and Raspberry Pi |Solution

Microwave & Microwave generation | How do they...